Here's how to set a default database for all subsequent queries.

You can change the default DB as often as you like. It's not necessarily a "set and forget" thing. Depending on how many databases you're working with, you could be switching the default DB quite frequently.

You can set the default database either programmatically or via the graphical interface.

Right-click on the database name in the SCHEMAS tab (in the left menu): 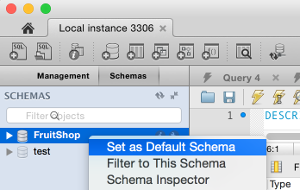 The default database will now be listed in a bold typeface:

The USE statement tells MySQL to use a particular database as the default when you run subsequent SQL statements.

Now any subsequent queries will be run against the FruitShop DB. Like this:

The USE statement can really come in handy in our scripts that create databases. Once we've created our database, we can set it as the default database by specifying the USE statement against it.

Doing this will ensure that any subsequent SQL statements will use our newly created database as the current DB (unless specified otherwise in the script). This is important because it tells MySQL which DB to create the tables against:

There's nothing to stop you switching the default database multiple times within your scripts. So if you had two databases, you could do something like this:

Of course, this is a simplified example. Often you'll find yourself doing more complex queries against your databases and this technique can really help.

Qualifying the DB Name in the Statement

Regardless of whether you set a default database, you can also specify the database within the statement.

To do this, use the following syntax: database.table.column

Override the Default DB — Specify the Database within a Query

So the above example could also be written as follows: