The CSS hwb() function is a proposed function in CSS that can be used to provide a color value. It allows you to specify a color value by specifying the hue, whiteness, and blackness components of the color, as well as an alpha value.

HWB (which stands for Hue Whiteness Blackness) is a hue-based representation of the RGB color space of computer graphics.

The hwb() function accepts the HWB value as a parameter. The HWB value is provided as a comma-separated list of three values — providing the hue, whiteness, and blackness components respectively.

A fourth value can be provided to specify the alpha channel of the color. It can be either a number, or a percentage value.

The hue can be easily identified by looking at the color circle. 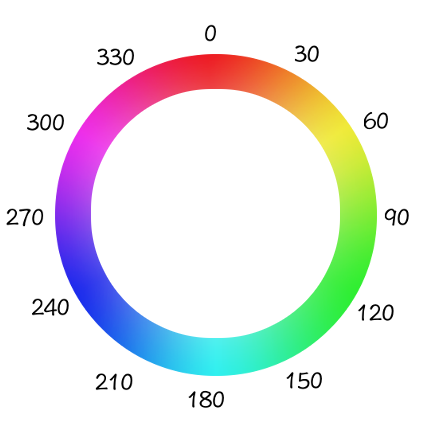 Here's an example for displaying blue:

The first of the three values — the hue component — represents an angle of the color circle. You can specify the value as an angle in degrees (e.g. 180deg) or simply as a number (e.g. 180). For example, if you look at the color circle, blue is at 240 degrees, so it could be written as either 240deg or 240.

The second value is expressed as a percentage. It represents the amount of white to mix in with the color. For example, 100% has full whiteness, while 0 represents no whiteness.

The third value is also expressed as a percentage. It represents the amount of black added to the color. For example, 100% has full blackness, while 0 represents no blackness.

Here's an example of using the hwb() function in a style sheet:

How to pick a Color

The easiest way to come up with a color is to pick a hue first. You can do this by taking a quick glance at the color circle and checking the angle of your preferred color.

Once you've picked your hue, it's just a matter of adjusting the whiteness and blackness until you get the right shade of your chosen hue.

Once you've finished these steps, it's likely you'll want to tweak it further. In this case, you can just tweak each value as needed — you don't need to start at step 1 again.

At the time of writing, the hwb() function is merely a proposal of the latest CSS spec (CSS Color Module Level 4).

Browser support for HWB is limited to non-existent at the time of writing. If the examples on this page display no color, it's likely your browser doesn't support the HWB method of specifying colors.

Here's a working example of using the hwb() function to define colors for a web page.

Tweak the HWB values to see the effect it has on the output.

In the following chart, the hue and blackness are exactly the same across all samples. The only difference is the whiteness level.

In the following chart, the hue and lightness are exactly the same across all samples. The only difference is the blackness level.