Access has traditionally been known as a desktop database system because its functions are intended to be run from a single computer (as opposed to a server database application where the application is installed on a server, then accessed remotely from multiple client machines). 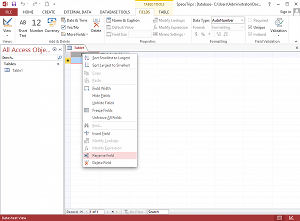 Having said this, Microsoft Access has included a web solution (as well as its desktop solution) since 2010, where it is integrated with SharePoint and, since 2013, SQL Server. This tutorial focuses on the desktop solution.

You may be wondering what the benefits of using Access are compared with using an Excel spreadsheet. Well, it really depends on what you want to do with the data that you're storing and how much data you intend to store.

Excel may be fine if you've only got a small amount of data, and if you don't have many attributes against each piece of data. It may be fine if you don't have much in the way of relational data across multiple worksheets. Once you start storing many attributes against each piece of data, and perhaps you find yourself repeating information across multiple worksheets, then it's time to start using Access (or another database system if you prefer).

Another important reason for using Access over Excel is, if you need to generate a lot of queries and reports. Access is much better suited for doing this compared to Excel.

When you create (and save) a database in Microsoft Access, the database is saved with a .accdb extension. This is the file extension you will use the most when developing Access databases. Older Access databases used an .mdb extension or sometimes a .mde extension, but in 2007, Microsoft started to phase these out in favor of the .accdb extension. If you're unable to open an older database, you may need to convert to .accdb first using a pre-2013 version of Access.

This tutorial uses Microsoft Access 2013. If you're using a different version, the screenshots might look a little different. Generally, most of the basic functions remain consistent between versions of Access so you should be able to follow along without any problems.

If you're using a really old version, check out the Microsoft Access 2003 Tutorial.