A discussion on writing SQL scripts and some quick examples.

In the previous lesson, we added data to our database table using the "Edit Top 200 Rows" option. In this lesson, we will look at how to write SQL scripts to update and run queries against our database.

SQL scripts are usually made up of one or more "statements". Each statement tells SQL Server what to do.

The above statement selects all columns from the Tasks table. The asterisk (*) means "all columns". The above statement could be modified slightly to only return a particular column, and we could add a WHERE clause to filter the data to only those records that we're interested in:

The above statement selects the TaskName column from the Task table, but it only returns those that have a StatusId of 3. The value of 3 could mean "To Do" or "Done" or whatever it is we want it to mean. In our TaskTracker database, we'll be creating a new table called Status where we'll specify what "3" means (and "1" and "2" of course). These numbers are simply the values in the StatusId field (which we specified as an Identity column - an autonumber). Each of those numbers will have a corresponding value in the StatusName field which will tell us what status it actually is.

Then, once we've created our Status table, we could modify the above SQL statement to include the Status table so that we can write WHERE StatusName = "To Do" instead of trying to remember what number "To Do" is.

But we need to create our Status table first...

Creating Tables with a SQL Script

Below is a SQL script that will another table on our database - a Status table. If you aren't familiar with SQL it might look a bit weird. But I'm sure you'll have some idea of what it does when you see the names of the columns and their corresponding data types. In this script, we aren't allowing any NULL fields (hence the NOT NULL next to each column). We're also creating a primary key for the StatusId field, and we're setting a default value to the DateCreated field to (getdate()).

To run this script, do the following:

Once the script has run, you should see a message that reads Command(s) completed successfully. 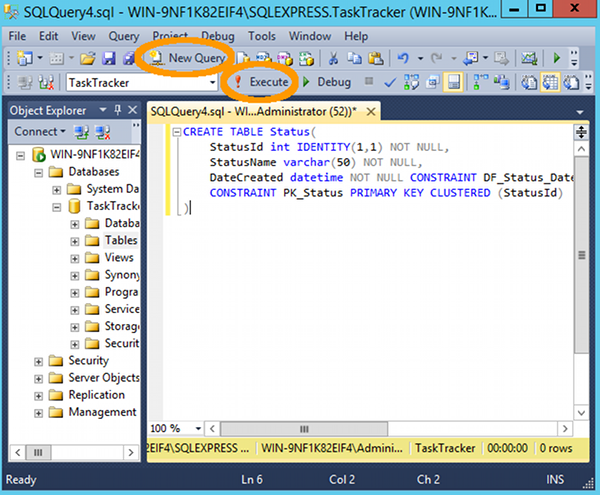 You can also run a query by pressing F5 on your keyboard.

Plus, you can even run part of a query by selecting the part that you want to run, then pressing F5. This works well on larger scripts that contain a lot of SQL statements, but when for some reason, you only want to run one or two (or even run all of them but just one at a time).

The following script inserts data into the Status table, and then selects that data (so we can see that it went in). Run this script the same way you did with the above script): 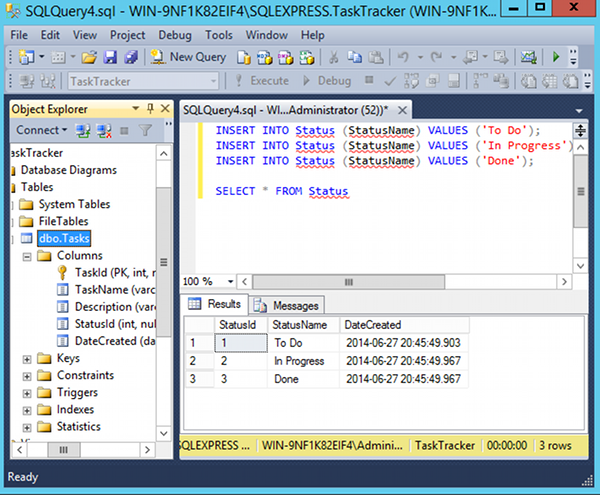 As you can see, the results of the query are displayed in the bottom pane.

Now that we've got our Status table, let's add a value to the StatusId field of the Tasks table (remember we left that field blank for all records because we didn't yet have the Status table).

To do this, we'll need to use an UPDATE statement (because we're updating the records rather than inserting new ones).

So without further ado, let's run the following script:

And you should now see your Tasks table, complete with its StatusId field populated for all records. Something like this:

Actually, we could just have easily combined all of the above scripts and run them as one. I only kept them separate in order to make it easier to understand which part does what.

If you'd like to learn more about creating SQL statements, check out my SQL tutorial.

SQL is case insensitive. So the following statements all mean the same thing:

Next we'll look at the query designer.