CSS provides options for handling content that extends beyond its containing box.

Over the years, browser manufacturers have implemented their own means for customizing the appearance of scrollbars.

If you're using a WebKit browser, you will see that the following scrollbars have been styled using WebKit extensions. See HTML scrollbars for more examples.

WebKit based browsers such as Chrome, Safari, and Opera can take advantage of the various -webkit- scrollbar pseudo-elements and pseudo-classes.

These allow you to customize all aspects of a scrollbar — from its color, to its size, shadows, and more.

Here are the WebKit pseudo-elements for styling scrollbars:

And here's where they fit within a scrollbar: 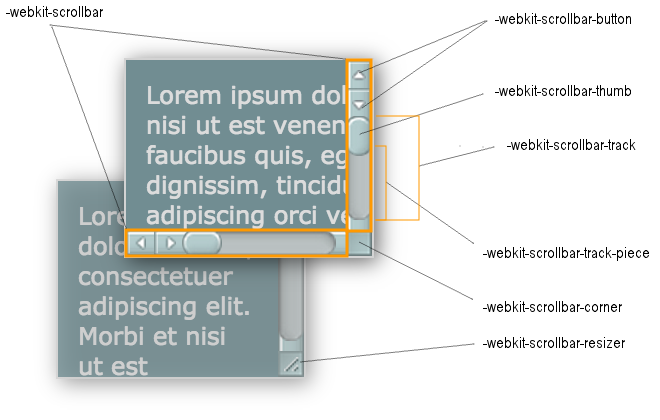 Here are the WebKit scrollbar pseudo-classes as outlined on the WebKit blog:

You can also use the CSS :enabled, :disabled, :hover and :active pseudo-classes with the various scrollbar pieces.

Microsoft implemented a bunch of proprietary CSS properties for customizing the color of scrollbars. They are:

Scrollbars can appear in the usual place such as the browser window or on a <textarea> tag. But you can also force scrollboxes onto other elements whenever their contents become too large to fit inside the box.

You can use CSS to create your own "inline scrollbars" by creating a box smaller than its contents. You can do this using the overflow property. Specifically, you can use overflow:scroll to force scrollbars to appear when the content overflows. This has an effect similar to inline frames (but using CSS is much simpler).

The above WebKit example on this page uses this technique. Here it is again but this time using inline styles and without all the scrollbar customization.